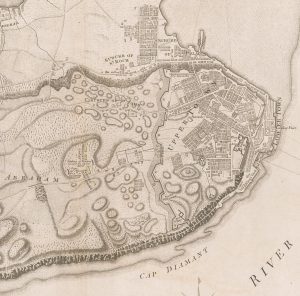 An important and long-lived map of the United States, with great interior detail reflecting the territorial development and geopolitical situation of the early Republic. The map depicts North America as far west as the Missouri River watershed and north to Newfoundland and the southern reaches of James’s (i.e., Hudson’s) Bay. It was first issued in 1777 […]

The single most important 18th-century chart of Narragansett Bay, prepared by Charles Blaskowitz for the use of the British Navy during the American Revolution. “…it is certain that the British, after occupying Newport at the end of 1776, used this map for their operations in this pivotal area. The detail shown is remarkable, including even the names […]