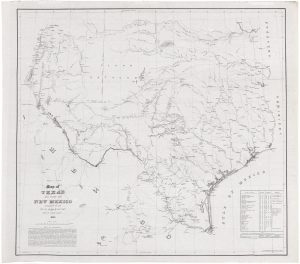 Although ostensibly a military formation, the early work of the Engineers was largely in “civilian” activities, connected with road- and canal- surveying and preparation, particularly in planning a national road network. Many of the published maps were appended to official reports from the War Department (and others) published by and for Congress. To this day the Corps of Engineers remains responsible for all federally-funded civil engineering projects.

As American attention moved westward, the Engineers were heavily involved in mapping the new countries being explored, publishing important maps of the Mississippi, Texas, New Mexico, and so on. Then, with the outbreak of the Civil War, the Topographical Engineers were refocussed on providing the mapping necessary for the armies in the field and the fleet at sea, such as this Map of the MILITARY DEPARTMENT of S.E. VIRGINIA.

Fine example of William H. Emory’s important map of the Republic of Texas and the adjacent regions, published in 1844 at the height of the controversy over annexation. During the Congressional debates on the annexation of Texas, one of the central questions was the location of its boundaries with neighboring states and with Mexico. Colonel […]

The exceptionally rare six-sheet Nicollet & Fremont map of the upper Mississippi River, considered the foundation of modern mapping of the Upper Midwest and Great Plains and “One of the most important contributions ever made to American geography.” (Gouverneur Kemble Warren). Nicollet’s map depicts the Mississippi Basin from just below the mouth of the Missouri […]

The first edition of a remarkable, separately-issued military map of Texas and the eastern part of New Mexico. This is one of several regional maps of the Western United States prepared by the Bureau of Topographical Engineers prior to the Civil War. They were not published per se but rather printed in very small numbers […]

A heretofore unknown, highly detailed manuscript map of the southern Virginia peninsula, evidently produced at the conclusion of the Peninsula Campaign. Pasted to the map are eight watercolors and pen and ink sketches by the mapmaker, four of which he has signed. In light of its high quality of execution and wealth of topographical, cultural and […]

This brilliantly conceived work was “the principal reference map for all field commanders in the initial stage of the Union campaign to capture Atlanta” (Stephenson.) One of military history’s great campaigns, the battle for Atlanta followed the Union victory at Chattanooga in November 1863. The first order of business was the preparation of an accurate […]

An impressive Civil War map of southeastern Virginia, compiled by the Topographical Engineers for use of commanders in the Union Army. The map shows cities, towns, and settlements; waterways, bridges, roads and railroads; and other details such as fortifications around Richmond, plantations along the James (including Carter and Westover), and slate quarries and gold in the […]

An important and extremely rare map of the Dakota Territory produced during the Black Hills Gold Rush. With valuable annotations in manuscript by a Dakota pioneer, recording an expedition to establish a route from Yankton to the gold fields. The map was originally printed by the U.S. Government for field use by high ranking officers and not […]

A very rare and fine military map of California and Nevada, issued in 1879, likely in the context of the last of the violence that became known as the California Indian Wars. With interesting annotations reflecting a number of long marches, presumably by an early owner. The map depicts California and Nevada along with adjacent […]

A rare and important map of the Territory of New Mexico at a tumultuous time of its history, compiled by the Army’s Bureau of Topographical Engineers “chiefly for military purposes.” The map was produced by “a careful redrawing and synthesis of the maps that had been made by the Bureau since 1846” and “is about […]