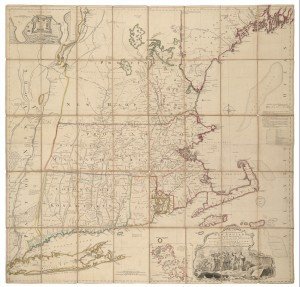 Born the son of a Birmingham cutler, in 1735 at age 15 or 16 Thomas Jefferys was apprenticed to map engraver and publisher Emanuel Bowen. He rose quickly, though, for in 1746 he was appointed Geographer to the Prince of Wales. This relationship endured when Prince George acceded to the throne as George II, at which point Jefferys was appointed Geographer in Ordinary to the King. The next few years, during which “he has been perceived as a quasi-official publisher to branches of the British government, during the Seven Years (French and Indian) War,” were probably his most prolific and profitable. Thereafter he undertook the survey and publication of large-scale maps of British counties, an overly-ambitious project which led to his bankruptcy in 1766 (see Harley). His stock was sold at auction, though he was able to continue operating his business by “some friends who have been compassionate enough to re-instate me in my shop” (Worms and Baynton-Williams, p. 350). He died in 1771, though from 1772-76 his son Thomas continued the business in partnership with William Faden.

For more on the career of Thomas Jefferys see:

The most important contemporary plan of Fort Ticonderoga and surroundings, a handsome and valuable delineation of the layout of the fortress, its strategic location commanding the river between Lakes George and Champlain, and troop positions during General Abercromby’s catastrophic frontal assault during the French and Indian War. Early in the Summer of 1758, the British […]

A small archive of material related to the 1842 donation to the Library of Congress of two interesting French and Indian War-era maps of North America.  In 1842 Doctor Andrew Nichols (1785-1853), a distinguished citizen of Danvers, Massachusetts, enquired of his Congressman, Leverett Saltonstall (1783-1845), whether the Library of Congress would welcome a gift from […]

An extraordinary image. Based upon sketches by Samuel Blodget, and originally published in Boston just six weeks earlier, the plan shows Sir William Johnson’s victory over the French and their Indian allies on the south shore of Lake George, September 8th, 1755. Coming on the heels of Braddock’s calamitous defeat on the Monongahela, the battle […]

The rare second state of Thomas Jefferys‘ Map of the Most Inhabited Part of New England, the pre-eminent 18th-century map of the region. In case map format and docketed in French on verso, suggestive of use by a French officer serving in North America in the early 1760s. First issued in 1755, Map of the […]

First edition of this important 1768 English analysis of existing textual and cartographic source materials relating to the possible existence of a Northwest Passage through Arctic Canada to the Pacific. Much of the driving force for the search for the Northwest Passage in the mid-18th century came from Arthur Dobbs (1689-1765). Dobbs became obsessed with […]

The first state of the pre-eminent 18th-century map of New England, eminently desirable for its geographic and political significance, tremendous visual appeal, and extreme rarity. Offered here in a superb example. Issued in 1755, Map of the Most Inhabited Part of New England was the largest-scale and most detailed and accurate portrait of New England to […]

A very rare, separately-issued depiction of the critical British base at Halifax, Nova Scotia produced less than a year after its establishment. First laid out in 1749, Halifax was a major development in Great Britain’s commitment to its American colonies. It was intended as a strategic counter to the massive fortress at Louisbourg on Cape […]

A fine composite map, well engraved and richly informative, depicting not one but two successive sieges and conquests of the French fortress at Louisbourg, the first in 1745 during King George’s and the second in 1758 during the French and Indian War. Background Eighteenth-century North America was one theatre in the global struggle for empire […]