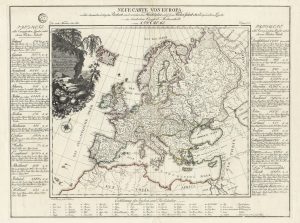 A rare and fascinating thematic map of northeastern North America by a French artist, printer, anatomist and crackpot geologist, remarkable also as an early example of color printing. A former pupil of Jacob Christoph Le Blon, and a pioneer in color-printing, Jacques Fabien Gautier D’Agoty (1717-1785) improved on the methods of his teacher by developing […]

A scarce volume of early American medical history. With an important article by Valentine Seaman featuring two all-but unknown thematic maps of yellow fever outbreaks in Manhattan, generally accepted as the earliest published epidemiological maps and preceding Snow’s work on cholera by half a century. The Medical Repository was the first American medical journal, founded […]

An extremely rare set of plans depicting the day-by-day progress of the December 1944 Battle of Bastogne, remarkable for their fine-grained detail, mix of highly-technical and pictorial features, and compilation in theatre within weeks of the battle. The story of the siege is well known: Bastogne was a major crossroads in the Ardennes, its capture […]

A rare tour de force of data visualization, depicting with elegance and visual economy the intensity and sweep of the lighthouses of Great Britain, and Ireland and the North Sea. As a nation that lived and died by the sea, in a region often wracked by bad weather, it was no wonder that by the mid-19th […]

A revolutionary 1957 thematic map of the North Atlantic Basin by geologists Marie Tharp and Bruce Heezen, which contributed greatly to acceptance of the theory of plate tectonics and continental drift. The map depicts the North Atlantic Ocean and surrounding basin, including most of eastern North America, with landmasses in yellow and submerged regions in […]

Put simply, a bathymetric chart is a form of thematic map depicting submerged topography, just as topographic maps depict terrestrial topography. This is usually accomplished by means of contour lines, often augmented by differential shading or coloring to highlight variations in depth. The earliest bathymetric charts were based on compilations of hundreds or thousands of […]

The scarce 1958 first edition of this landmark oil map of Saudi Arabia, the product of a remarkable partnership between the Saudi and American governments, Saudi Aramco, and the U.S. Geological Survey. This is one of the most influential oil maps ever produced, being the first accurate and comprehensive general oil map of the entire […]

A detailed thematic map illustrating European agricultural, extractive and manufacturing activity at the end of the 18th century. Thought to be the earliest example of economic mapping. Crome’s map illustrates the distribution across Europe of the production of 56 commodities and other products, including gold, copper, wine, fruit, salt, hemp, silk, horses, and so on. The symbols for each […]