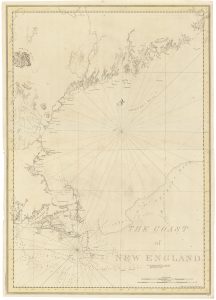 Samuel Holland (1728-1801) was born in the Netherlands and served in the Dutch army’s engineers. Subsequently he followed a well-trodden path, enlisting in the British Army. With his military background, he presumably went to the officer training college at Woolwich, before being commissioned into the 60th (Royal American) Regiment, whereupon he was sent to North America for active service in the French and Indian War. While ostensibly an infantry regiment, and symptomatic of the British Army’s casual approach to the military business of engineering and surveying, the Royal Americans provided a home for some of the greatest mapmakers in North America in the colonial period, notably J.F.W. des Barres, John Gerard William de Brahm and Thomas Hutchins, with Samuel Holland every bit their equal.

Holland was present at the capture of Louisbourg in 1758 and was heavily involved in the successful operations against Quebec in 1759, where he gave the legendary explorer James Cook training in surveying methods. As a reward for his distinguished service, in 1764 he was appointed Surveyor General of Quebec and of the Northern District of North America. Following the loss of the American colonies, he served as Surveyor-General of Upper and Lower Canada, until his retirement in 1792.

In his dual roles as Surveyor-General of Quebec and of the Northern District of North America, Holland was heavily involved in mapping Great Britain’s American colonies. His towering importance is demonstrated by the frequency with which the manuscript surveys of Holland and his assistants were used to underpin very many of the printed maps of the period, notably the charts published by J.F.W. des Barres in The Atlantic Neptune, an example which may be viewed here and here.

An imposing manuscript by John Rutse Bleecker, an influential Albany surveyor with connections to leading American and British mapmakers of the Colonial era. The manuscript comprises three separate maps, depicting the Hudson Valley, land along Schoharie Creek, and the Seneca Country in western New York. John Rutse Bleecker (1713-1800) Bleecker was a scion of a […]

A most interesting manuscript map by John Rulse Bleecker, an influential Albany surveyor with connections to leading American and British mapmakers of the Colonial era. The map At 10 miles to the inch, Bleecker’s map focuses on the region straddling the Hudson River and bounded on the south by Claverack Creek and on the north […]

The earliest printed plan of Newport, Rhode Island, published for the use of British forces just months before they occupied the town in December 1776. Based on surveys by Charles Blaskowitz, one of the finest surveyors in the British military, it is also arguably the most appealing plan of Newport ever issued: The overall layout, […]

A very fine chart of Massachusetts Bay from the Atlantic Neptune, issued for use of British navigators early in the Revolutionary War. The Atlantic Neptune is arguably the finest atlas of North American waters ever produced, achieving in its more complete states full coverage of the East and Gulf Coasts. The Neptune’s great strength was […]

This chart from Des Barres’ Atlantic Neptune was the most accurate contemporary chart of the region and remained so for the better part of 50 years. For their blend of accuracy and visual appeal, the charts of the Neptune have probably never been surpassed. Description The chart depicts the Buzzards Bay, Vineyard Sound and the surrounding […]