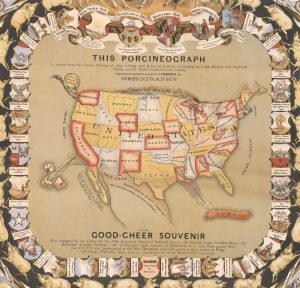 The pictorial map style is one of the oldest—and one of the newest!—genres of mapmaking, and also one of the most collectible.

Arguably pictorial maps appeared even in the ancient world, for example on the Madaba mosaic map, which depicts the cities and village of ancient Palestine as tiny vignettes and includes a scattering of decorative flora and fauna. Likewise medieval mappaemundi, huge maps of the world (as then known!) drawn and painted on parchment, often feature pictorial elements such as cities and towns (with Jerusalem invariably at the center), the Garden of Eden, flags and/or tents representing kingdoms, and real and imaginary animals and mythic beasts. Some of these quasi-mythic elements were retained on early printed maps; for example, the world map in Hartman Schedel’s 1493 Liber Chronicarum (aka the Nuremburg Chronicle), features in the left border images of monstrous creatures first “described” by Herodotus, tiny heads representing the Winds, and three half-length profiles of Noah’s sons Shem, Ham and Japhet.

During the 18th-19th centuries pictorial elements, without disappearing entirely, fell out of fashion among many of the leading mapmakers in England, France, Germany and the Netherlands. Many maps came to have a relatively “stripped-down” aesthetic focusing almost solely on geographic data, with decorative elements, if any, confined to cartouches. Consider for example this map of the British capture of New York City in 1776, this navigation chart of Plymouth Bay from the Atlantic Neptune, and this 1857 map of Texas.

The pictorial map began to re-emerge as a genre in the late 19th century, as a new stream of “popular” (lowbrow?) mapmaking, intended to educate, influence opinion or simply entertain, diverged from the tradition of “empirical” or “scientific” map making. Some of the earliest examples was the comic map of Europe issued by Paul Hadol during in 1870 and the unforgettable Porcineograph produced here in the United States. By the 1920s pictorial map making was in full swing, both in the United States and abroad, with maps appearing in books, board games, magazines, newspapers and on matchbooks, menus and stamps, as well as being separately published.

For the collector pictorial maps have at least two great advantages: First, their variety is essentially infinite, with maps produced all over the world and extending to just about every conceivable area of human interest. Second, though prices have appreciated in recent years, they remain relatively affordable: even most of the “great” pictorial maps are priced at a fraction of the cost of iconic maps of earlier periods, and most maps of the genre are accessible to collectors at just about any price point.

Aviation Cavalcade is an exuberant pictorial map highlighting American might near the end of WWII… published to promote, of all things, a men’s clothing company in Milwaukee!  The map depicts a huge range of American military aircraft—real and imaginary–dominating the skies over an oddly-rendered north polar projection of the world, with nary an Axis plane […]

There is no excerpt because this is a protected post.

A scarce and wonderful 1888 pictorial promotional map of the White Mountains by Franklin Leavitt, being the final map produced by him over three decades. By the mid-19th century the transmission of the Romantic ethos across the Atlantic, the rise of a middle class with disposable income, and the development of rapid rail links with […]

A justly-iconic product of the late-60s, Humbead’s Revised Map distills the world to its essentials, or at least to the places and people most “top of mind” for the American counterculture. The map imagines the world as consolidated in a single supercontinent comprising Los Angeles, San Francisco, Berkeley, New York City and Cambridge, with small […]

Only the second-known example of this 1982 pictorial map reimagining America as a gay paradise adorning a very, very short pair of denim cutoffs.  Much as the Green Books had catered to African-American travelers of the 1930s to 1960s, so did Guy Strait’s The Lavender Baedeker and the many editions of Bob Damron’s Address Book […]

A mammoth and colorful “Nav War Map” of the Mediterranean issued by the U.S. Navy near the end of World War II. This impressive, separately-published propaganda map was produced in 1944 to highlight the strategic importance of the Mediterranean, which “offers many approaches to Fortress Europe.” It also emphasizes Allied successes there during the Second […]

A vibrant persuasive map of the United States by meatpacking giant Armour and Company, making the case for the strategic importance of its industry. Founded in the 1860s by Philip Danforth Amour (1832-1901), Armour and Company was a meatpacking pioneer, using refrigeration, assembly-line methods, canning and economies of scale to become the industry leader. For […]

A spectacular and unrecorded Second World War cartographic poster celebrating the essential contribution of the U.S. Army’s Transportation Corps to Allied success in the European Theater. The Transportation Corps was established in July 1942 through consolidation of several functions and units previously distributed between the Quartermaster and Engineer Corps. The new entity was responsible for the […]

A delightful—and unrecorded—pictorial map commemorating an American officer’s stint in Iceland from 1959-60. The map adorns a large printed certificate, designed to be completed in the name of individual servicemen and presented to them upon their departure from Iceland. It depicts a cartoon-ish version of the country, featuring little but geysers, fish racks and volcanos, […]

A rare brochure distributed to participants in Burning Man 2008, the theme of which was “American Dream.” One side of the brochure features a pictorial map of the Playa, with the design conceit of a picnic table—that most American of spaces!–covered with ants. The reverse is a bare-bones guide to Burning Man logistics and a […]