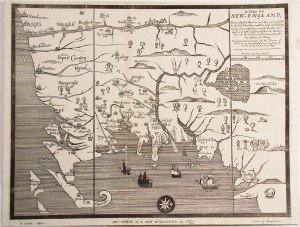 A partnership of John and William Pendleton, Pendleton’s Lithography was Boston’s first lithographic firm. Having previously worked as engravers, the brothers acquired lithographic equipment and supplies and set up shop in 1825. The brothers parted ways in 1829, with John moving to New York and opening his own lithographic operation, while William continued to run Pendleton’s Lithography in Boston until 1836. In that year William sold the firm to his bookkeeper Thomas Moore, under whose name the business continue to operate.

From the beginning maps and topographic views were an important part of Pendleton’s output.  Their very first map–and indeed one of the first lithographic maps issued in America–was probably an 1826 facsimile of Foster’s 1677 “Map of New-England.” Their topographic views included for example works by early female lithographic artist Mary Jane Derby, images of Boston, and works by Fitz Henry Lane such as this iconic 1836 view of Gloucester.

For those with an interest in maps, however, Pendleton’s Lithography should be best remembered for issuing dozens of seminal maps of Massachusetts towns in the 1830s… the consequence of a statewide mapping project that required each town to commission a detailed survey of its lands.  For example, see these maps of Amherst, Dorchester, and Nantucket, all products of Pendleton’s Lithography.  These surveys were later compiled by Simeon Borden to produce the 1844 Topographical Map of Massachusetts.

A who’s-who of American artists and lithographers worked at one time or another for Pendleton’s, including among others John H. Bufford, Nathaniel Currier, Orra White Hitchcock, David Claypoole Johnston, Fitz Henry Lane.

An immensely detailed view of Dover New Hampshire in the early 19th century. In addition to its intrinsic rarity, this is remarkable as one of the very few printed plans of New Hampshire towns issued prior to 1850. The print consists in fact of two maps. At left is a map of the town on […]

An early, lovely and apparently extremely rare view of Quincy Market, built in 1824-26 to accommodate the overflow from Faneuil Hall. The view was drawn by Alexander Jackson Davis (1803-1892), a successful architect and leading proponent of the Greek Revival style. Before turning to architecture, Davis began his career as a watercolorist and lithographer in […]

A fine and rare map depicting the human and natural geography of Worcester, Massachusetts. First settled by the English in 1674 the area was twice abandoned during King Phillip’s and Queen Anne’s Wars before being permanently resettled in 1713, incorporated in 1722 and named seat of the newly-created Worcester County in 1731. Taking advantage of […]

This is a lithograph facsimile of a most important map originally issued in 1677 to illustrate the London edition of William Hubbard’s Present State of New England. Though seemingly crude in execution, the map was for its time the most advanced map of southern New England. This is reflected in the number of towns identified, […]

A detailed and very rare plan of the village of Ipswich Massachusetts in the early 1800s. The plan provides a street plan, names landowners, and identifies landmarks such as businesses, churches, schools, and other public buildings, with many of these shown in miniature profile view. The latter feature gives the map added documentary value, as […]

A fine example of this lovely map of Amherst, most unusual for its splendid early color. This wonderful map provides an immensely detailed view of this lovely college town in central Massachusetts. It depicts the town’s boundaries (with the length and bearing of each segment), the road network, and features of the natural topography (with […]

A striking, historically significant, and very rare plan of Nantucket in 1834, when it was near its peak as the whaling capital of the United States as well as one of its wealthiest towns. The plan The plan is based on surveys conducted by William Coffin, Jr. a scion of one of Nantucket’s oldest and […]

A fine and extremely rare map depicting the human and natural geography of the town of Leominster in Worcester County, Massachusetts. The map provides an immensely detailed view of the town in the early 1800s, including the its boundaries, the road network, and features of the natural topography (with symbols for woodlands, and shading employed […]

A view of the Massachusetts State House in flames, adorning a certificate of service in the Boston Fire Department. The fire in question occurred in 1832 and affected the third floor as well as the tower. Due to the Fire Department’s (relatively) rapid response damage was limited, and the repairs amounted to only $3500. The […]

This very rare, detailed map is definitive for the original 1835 survey of the Chickasaw Cession, which included all of Mississippi north of a diagonal line that ran from the Mississippi River at Moon Lake southeast to the confluence of the Chuquatonchee and Tombigbee rivers. It is the definitive map for Northern Mississippi at the […]