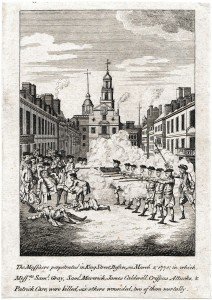 Popular culture has unfortunately reduced Paul Revere (1734-1818) to a cartoon, best known (or more accurately, known only for) the “Midnight Ride” immortalized by Longfellow’s poem. But Revere is better remembered as, not just a patriot, but an accomplished silversmith whose work is among the treasures of Boston’s Museum of Fine Arts, an engraver whose works are eagerly sought by collectors and libraries, and early American industrialist, who founded a firm capable among other things of producing enough copper to sheathe the bottom of the USS Constitution.

As an engraver during the late Colonial and Revolutionary eras, Paul Revere produced a number of iconic cartoons and other images, most in the service of the Patriots’ cause.  The most famous of these is of course “The Bloody Massacre” (1770), a brilliant propaganda piece positioning the occupying redcoats as the villains of the Boston Massacre. But he also produced well-known images such as the view of British troops landing at Long Wharf (1770), and “The Able Doctor” (1774), to name a couple.  Prior to the Revolution Revere also engraved at least two maps, one being a world map illustrating John Hawkesworth (ed.), A new voyage, round the world … by, Captain James Cook (Hartford, 1774).  The other was Bernard Romans’ monumental map of Florida, the only know copy of which is held by the Library of Congress.

The quality of Revere’s engraving varied quite markedly, from a crude, almost child-like rendering of King Philip (aka Metacomet) to the ambitious work on Roman’s map of Florida.  It is however undeniable that he had a gift for being at the center of the action and for creating lasting images that reflected the fevered mood of this times.

The fatal March 5, 1770 riot in Boston immediately rebranded by Patriots as a “massacre” was immediately seized upon as a worthy subject for depiction in print. Revere’s “Bloody Massacre” engraving, pirated from a drawing by artist Henry Pelham, was advertised the Boston press as soon as March 26, while Pelham`s own version appeared just […]

A manuscript seating plan for the 1811 Fourth of July celebration in Boston’s Faneuil Hall, indicating the presence of both John Adams and Paul Revere. Reconstructed and enlarged in 1806 under the direction of architect Charles Bulfinch, Faneuil Hall served multiple functions: a public market on the ground level, city offices and a Great Hall […]

The fatal March 5, 1770 riot in Boston—immediately rebranded by Patriots as a “massacre”—was immediately seized upon as a worthy subject for depiction in print. Revere’s “Bloody Massacre” engraving, pirated from a drawing by artist Henry Pelham, was advertised the Boston press as soon as March 26, while Pelham’s own version appeared just a week […]

Benjamin Church’s extraordinary history of King Philip’s War, in the desirable 2nd edition with two engraved portraits by Revere, including the important engraving of Metacomet. Background King Philip’s War erupted in June 1675, after years of deteriorating relations between the Massachusetts and Plymouth colonies and the Wampanoag tribes around Narragansett Bay. Fighting began at the […]

The fatal riot of March 5, 1770, rebranded by Patriots as the Boston Massacre, was immediately seized on as a worthy subject for depiction in print. Paul Revere’s “Bloody Massacre” engraving, pirated from a drawing by artist Henry Pelham, was advertised the Boston press as early as March 26, while Pelham’s own version appeared a […]

A rare Boston almanac from the pre-Revolutionary period, with a terrific Revere cartoon lampooning Governor Hutchinson. Thomas Hutchinson (1711-1780) was an eminent merchant, politican and historian in pre-Revolutionary Massachusetts, and served continuously as Lieutenant Governor and then Governor from 1758-1774. Though intelligent, competent, and rather fair minded, his conservative and Loyalist policies brought him into conflict […]

A scarce and delightful Revolutionary-War cartoon published in Boston in 1780 and likely engraved by Paul Revere. Owned in partnership with James Arsenault & Company. The cartoon is closely based on one that appeared in London in the February 1778 The Westminster Magazine. This came at one of Great Britain’s low points in the Revolution, just […]