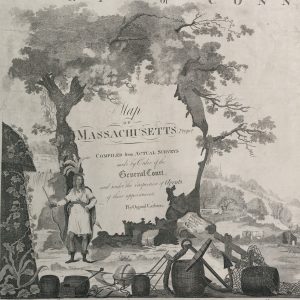 “Mathematical practitioner” Osgood Carleton (1724-1816) of Boston is remembered today for his considerable output of important maps of American subjects.  Among the best known are seminal maps of Boston, Massachusetts, Maine and the United States, often produced in partnership with Boston engraver and publisher John Norman.  Carleton was sufficiently well respected that other mapmakers, such as Norman as well as Matthew Clark, solicited his “seal of approval” on their work.

A classic “hard-luck” story, Osgood Carleton sought to make ends meet by engaging in a wide variety of professional activities involving applied mathematics: “Income and a certain celebrity resulted from his various published endeavors, but teaching and surveying formed the pillars of Carleton’s livelihood. The ledger of his career, like those of many other practitioners, resembles a catalogue of occupations that reflects an enterprise and opportunism born of economic necessity.” (Bosse, p. 143)

The single best summary of Carleton’s life and work may be found in David Bosse’s “ Osgood Carleton: Mathematical Practitioner of Boston,” Proceedings of the Massachusetts Historical Society, vol. 107 (1995), pp. 141-164.

The 1794 edition of John and William Norman’s famed American Pilot, including important charts of Nantucket by Pinkham and of the Carolinas by Dunbibin. One of the first atlases to be published in the United States, and only the third complete copy on the market since the Streeter sale in the mid 1960s. Background Good […]

A great rarity, this seminal map by Osgood Carleton is by far the best 18th-century map of Massachusetts and one of the earliest officially-sponsored maps of an American state. With extensive expert restoration and priced accordingly, but all-but unobtainable in any condition. The map’s large scale of six miles to the inch gave mapmaker Osgood […]

A mammoth, detailed and rare 18th-century American chart of Chesapeake Bay. From John and William Norman’s American Pilot, one of the earliest atlases published in the United States. This impressive chart depicts the complex coast from New Jersey south to just below Cape Henry, Virginia. It provides an immense amount of detail for Delaware Bay […]

An early, valuable and exceptionally rare map of Maine while still the “Eastern District” of Massachusetts, with the ownership inscription of renowned Maine mapmaker Moses Greenleaf. The map by John Norman of Boston is a reduced edition of An Accurate Map of the District of Maine, which had been compiled by Osgood Carleton, engraved by […]

A rare and detailed plan of Boston by Osgood Carleton, taken from the 1796 second edition of John West’s Boston Directory. This plan’s relatively large scale enables it to depict Boston in greater detail than any map of the town since before the American Revolution. The street layout is shown and all streets named, as […]

An essential Maine map. Description This monumental map depicts Maine at a scale of 2.5 miles to the inch. The very large scale enables the map to provide much detail of the intricate coastline and complex system of rivers, streams, lakes and ponds, though surprisingly little attention is paid to its many mountainous areas. The […]

A monumental wall map of the United States by Osgood Carleton, much enlarged and greatly updated to reflect political developments and advances in geographic knowledge. A great rarity, known in only 10 or 11 examples, most in American institutions. The map Carleton’s first attempt at a wall map of the country appeared in 1791 as […]

An early manuscript plan of Boston, based on Osgood Carleton’s 1796 plan of the city and perhaps rendered by a Boston-area schoolboy or schoolgirl. Carleton’s plan, and this carefully-rendered copy, depicted Boston in greater detail than any map of the town since the American Revolution. The street layout is shown and all streets named, as […]

An exciting discovery, being an unrecorded 1799 second state of Osgood Carleton’s 1791 wall map of the United States. With extensive re-engraving including both changes and additions to the Northeast, Southeast, and western Kentucky and Tennessee. Engraved on five sheets, the map depicts the United States, as well as parts of British Canada, Spanish East […]