Posted on by of Boston Rare Maps 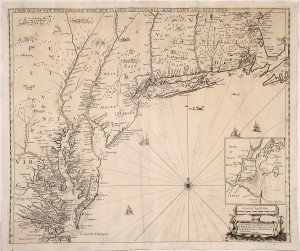 John Thornton (1641-1708) has been described as “certainly the most competent and distinguished chart maker in England” of his day (William Ravenhill). Thornton was trained as a manuscript chart-maker, but his partnership with John Seller brought him to publishing, and by the time of his death he was the foremost English chart-publisher.

John Thornton is best known for two volumes that he added to Seller’s English Pilot, the Fourth Book devoted to the American eastern seaboard and the Third Book, the first European published chart-book of the sea route to the East Indies and Far East, both containing up-to-date and original charts of the regions depicted. Thornton also published Atlas Maritimus, a volume of sea-charts assembled to order for the client, but such atlases are so rare as to be all but unknown.

His reputation brought him a plentiful flow of non-chart materials for him to publish, generally sold as separate sheets and now rare. As unofficial Hydrographer to the Hudson Bay Company and to the East India Company, he had access to their latest manuscript materials for publication. He was to publish the two foundation maps of Pennsylvania for William Penn and was publisher of many of the most significant maps of the individual American colonies in the 1680s and 1690s, while also offering many important maps and charts of all parts of the world.

It seems we can't find what you're looking for. Perhaps searching can help.