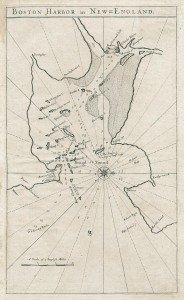 John Seller (ca.1632-1697) may regarded as the true founder of the English chart-publishing trade, starting at a time when the Dutch dominated the field. He was the first to build a business and a legacy that, through his successors and the partners he brought in, continued on into the Victorian period.

An ambitious figure, his principal project was The English Pilot a series of pilot books with charts, intended to cover all the world. In parallel, he prepared the Atlas Maritimus, a sea-atlas of the world, assembled to order.

In 1677 Seller was forced to bring in partners . The two most important were John Thornton, the celebrated chart-maker, and William Fisher, a prominent nautical publisher. Fisher’s successor firm, colloquially “Mount & Page” went on to be the dominant English chart-publishers of much of the eighteenth century. Unfortunately, the partnership was short-lived and Seller’s partners went on to overshadow him.

John Seller was also an important publisher of separately-issued maps; there seems little doubt he oversaw publication of Augustine Herrman’s wall map of Virginia and published a famous map of New England among his prodigious output. However, after about 1680 he refocussed on the large-scale mapping of the English counties, which provided a quick route to financial ruin, and a series of pocket atlases of the world, terrestrial and maritime, the English counties and celestial atlas, all of which are now rare.

Very scarce chart of the coasts of New England and the Canadian Maritimes from John Seller’s Atlas Maritimus, the best depiction of the region then available. Published in 1674, at a transitional moment in the history of the English colonies in North America. The chart depicts the coast from eastern Long Island round to Newfoundland […]