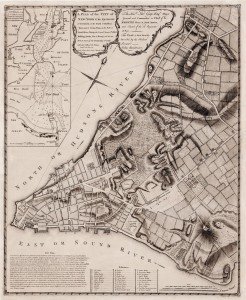 John Montresor (1736-1779) was born into a British Army family of Swiss-French Huguenot descent, and had a most distinguished career in North America. He was first posted there early in the French and Indian War, while his father James Gabriel Montresor was serving as chief engineer to British Commander-in-Chief General Braddock. John was wounded at the Battle of Fort Duquesne in 1755, before training as an engineer. He was present at the sieges of Louisbourg in 1758 and Quebec in 1759, and was later active in the outer fringes of the English colonies, particularly northern New York. At the start of the Revolutionary War he was appointed Chief Engineer in North America.

Throughout Montresor’s career he was active as a mapmaker, and a large number of his manuscript maps survive. He is probably a principal source for John Rocque’s map of North America 1765. In the mid-1760s he was in New York, drawing a series of plans of the city, culminating in his great plan of New York published by Mary-Anne Rocque in 1768 and reprinted during the Revolutionary War. In 1768, he published a wall-map of Nova Scotia and Cape Breton and a wall-map of New York Province in 1775. That year, with Thomas Hyde Page, he drew plans of Boston and of the Battle of Bunker Hill, which were soon published by William Faden.

Brilliantly talented but an arrogant and difficult man, seemingly lax with his accounting, and with a colorful private life, his career seems to have stalled and he retired from the army in 1778, spending much of his later life fighting with army authorities over his expenses. His journals are eminently worth reading, for both his extraordinary adventures and his acidic opinions of many of his contemporaries.

A monumental, separately-issued map of the Canadian Maritimes, by the most accomplished military engineer in Great Britain’s North American service. The years between the end of the French and Indian War and the start of the Revolution were extremely fertile for the mapping of North America, as the British administration sought to understand millions of […]

“A seminal map of New York City” (Cohen & Taliaferro), produced by Great Britain’s most important military engineers working under the most difficult circumstances imaginable. John Montresor (1736-99) was a British military engineer with a long, varied and almost unbelievably accomplished career in the American Colonies, beginning with service during the French and Indian War […]

A monumental map by one of the best British mapmakers of colonial America. The years between the end of the French and Indian War and the start of the Revolution were a most fertile period for British mapmaking in their American colonies. One area of focus was the corridor running from the Richelieu River in […]

Large, finely-executed, Colonial-era manuscript map of the Hudson River-Lake Champlain Valley. The map was drawn in 1763-1765 by Francis Pfister, a notable surveyor, mapmaker and officer in the British Army, and taken from him after he was mortally wounded at the Battle of Bennington. The map is the apotheosis of French and Indian War-era knowledge […]

One of the most careful depictions of the Boston area executed during the Revolution, taken from surveys made on the spot by British engineers. Following the April 19, 1775 battles at Lexington and Concord, the British retreated to Boston. There they were besieged by thousands of New England militia who encamped in Charlestown, Cambridge, Brookline […]