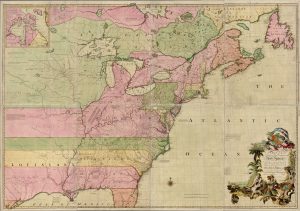 John Mitchell (1711-1768) was born into a Virginia planting and merchant family. He studied medicine at the University of Edinburgh but returned to Virginia before graduating. He worked as a doctor, with a personal interest in botany and mapping. However, he was dogged by ill-health and returned to England in 1746 with his wife. They were captured by a French privateer on the crossing; although they were released, the privateers kept all their possessions, including his botanical specimens. In 1748 he was elected as a fellow of the Royal Society.

Shortly after his arrival back in London, John Mitchell was commissioned by the Board of Trade to produce what is now viewed as his greatest achievement, a mammoth wall-map published in 1755 on eight sheets as A map of the British and French Dominions in North America, with the roads, distances, limits, and extent of the settlements. it is believed that Mitchell expressed his views on the subject also in an anonymous account, The Contest in America between Great Britain and France, with its consequences and importance; giving an account of the views and designs of the French 1757.

The map define an aggressive interpretation of British imperial claims in North America at the commencement of the French and Indian War, and again at the commencement of the Revolutionary War, and was then used to map the international boundaries of the newly-established United States in the 1783 Treaty of Paris. The “Mitchell Map”, as it is termed, was the basis for very many maps of eastern North America published over the next forty years.

One of the rarest of the many maps published to legitimize British territorial claims in North America during the run-up to the French and Indian War. Bowles’ map depicts North America from Labrador to Florida and as far west as the upper reaches of the Missouri, Arkansas and Red Rivers. Key topographical features are shown, with […]

An iconic propaganda map, the 1755 Anti Gallicans Map is the most extreme cartographic statement of British imperial claims in North America at the outset of the French and Indian War. The Society or Order of Anti Gallicans was organized in 1745 or -46 in response to the renewed hostilities with France, known now as King […]

A lovely old-color example of one of the earliest maps to name the United States, indicate its borders per the Treaty of Paris, and depict the Stars and Stripes. Per the subtitle, Brion de la Tour compiled the map from various English maps and other sources, as well as the boundaries set by the Treaty […]