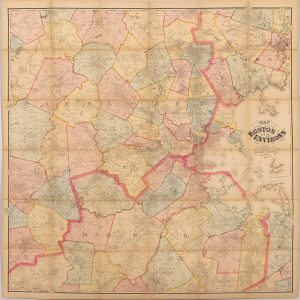 Henry Walling was perhaps the most accomplished and interesting American mapmaker of the mid-late 19th century, in no small part because of his prolific output:  Between 1848 and 1888 he produced perhaps 150 large-scale, separately-issued maps of American towns and counties; several seminal state maps; numerous state and county atlases; and many maps for the U.S. Geological Survey.  But arguably his greatest impact was as a serial innovator.  He helped pioneer new models of partnership between commercial, local, state and Federal mapping enterprises; demonstrated that commercial mapmakers could produce high-quality, low-cost maps by drawing on the work of government scientific agencies; was a leading advocate of applying geodetic survey methods and tools to local and regional surveys; and catalyzed the first topographical (i.e., three dimensional) survey of an American state.

To learn more about Walling’s long and fruitful career, see our article “Henry F. Walling and the Mapping of New England’s Towns, 1849-1857.”

A monumental and richly informative map of Coos County, New Hampshire, including the northern ranges of the White Mountains. By Henry F. Walling, one of the preeminent American mapmakers of the latter half of the 19th century. Published in 1861, this is by far the largest and most detailed map of Coos County and the […]

A rare, attractive and terrifically informative map of Concord New Hampshire by Henry Walling, arguably the preeminent American mapmaker of the mid-19th century. This very rare map depicts the center of Concord at a terrific level of detail for the time. The very large scale of 500 feet to the inch permits Walling to show […]

A monumental and richly informative wall map of Berkshire County in western Massachusetts, known today as a beauty spot and cultural destination for the profusion of museums and performing arts venues in Great Barrington, Lenox, Stockbridge, Williamstown and surrounding towns.  Published in 1858, this is by far the largest and most detailed map of Berkshire […]

A monumental map of the greater Boston area, including coverage of much of Essex, Middlesex, Norfolk and Plymouth Counties. The map provides a complete street plan, with many streets named; the rail network is depicted; and hundreds of businesses, places of worship, schools and other landmarks are labeled. The natural topography is differentiated by hachuring […]

A lovely example of this scarce and richly-detailed map. The map’s very large scale enables Walling to portray Rochester in enormous detail, including the street network and the lines of the Cape Cod and Fairhaven Branch Railroads; dwellings, mills, schools and other structures; and the names of hundreds of landowners. Symbols differentiate the varied topography […]

A rare and richly-detailed wall map of Winchester, Massachusetts, the first to be published of this prosperous suburban town. The map depicts Winchester in 1854, just a few years after its incorporation in 1850 with territory carved from the surrounding towns of Arlington, Medford, Cambridge and Woburn. The very large scale enables Walling to portray the natural […]

An important, decorative and surprisingly rare map of Newport County by the preeminent New England mapmaker of the 19th century. Walling’s was for its time by far the largest and most detailed map of Newport County, Rhode Island. The scale allows for great detail, including topographical features and roads; the locations of quarries, mills, mines, […]

Walling’s own copy of his important and scarce pocket map of the White Mountains. The map depicts the natural and human geography of the region in great detail, including lakes, streams and rivers; hills and mountains; county and town boundaries; roads and railroads; and mills, factories and other industrial establishments. The most striking features, however, […]

An extraordinarily-detailed depiction of Fall River, by one of the great map makers of 19th-century America. This image is really two maps in one, with a large-scale plan of the center of Fall River surmounting a somewhat smaller-scale map of township. The relatively large scale of both enabled Walling to portray Fall River in enormous […]

A superb, monumental and decorative map of Rhode Island by the preeminent New England mapmaker of the 19th century. Offered here in a rare and unusual variant with added text panels. At one mile to the inch, Walling’s is by far the largest map of the state produced for its time. The scale allows for […]