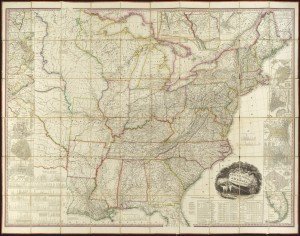 Henry Schenck Tanner (1786-1858) was a central figure in the flourishing of the American map-publishing trade in the early nineteenth century. Working closely with John Melish, and then alone, he set about proving that Americans could create maps every bit as good – or better – than their British and European rivals. His abilities were recognized by his election to the Geographical Societies of London and Paris.

The younger brother of the map-engraver Benjamin Tanner, he was a skilled and prolific engraver in his own right, supplying maps for many contemporary travel accounts and atlases. He took over and published the New American Atlas in 1823, the atlas the equal of any of the period, notably the four-sheet map of North America.

In the 1820s and early 1830s his was the leading American map-publishing house, with a substantial output, associated with engraving or publishing many of the best maps of the day, landmarks (from a long list) including his Map of the United States of Mexico (1825), a the superb wall-map of the United States of America (1830) and Stephen Fuller Austin’s seminal Map of Texas (1830).

The map of New England from Henry S. Tanner’s monumental New American Atlas. The atlas was first issued in parts between 1819 and 1823, while the present map is from the 1825 revised edition. Tanner’s life and work-and the American Atlas in particular-merit an entire chapter in Ristow’s American Maps and Mapmakers (chap. 13). Among […]

John Wilson’s monumental 1822 map of South Carolina, the first official map of the state and the first significant remapping of the state since before the Revolutionary War. Printed on four sheets, this very large wall map delineates county. judicial district and parish boundaries; along with roads, waterways and canals (including two sections of the […]

A remarkable wall map of the world by the remarkable Henry Tanner and arguably the culminating cartographic achievement of his career. “The object of Mr. Tanner was not to make a reprint of any former map, but to incorporate into one splendid effort, the correct delineations of existing publications with the late discoveries of Ross, […]

The 1830 first edition of the Austin map of Texas, arguably the single most important map in Texas history, and one of the great rarities of cartographic Americana. The Stephen F. Austin Map of Texas occupies an important place in American and Texan history and the progress of westward expansion. As the first broadly accurate map of […]

Fine example of the groundbreaking 1846 “Third Edition” of Tanner’s map of Mexico, one of the most important American maps of the 19th-century and the most influential general map of the Mexican-American War period. This fascinating map embraces all of what was until 1848 the Republic of Mexico, which included the modern-day nation as well […]

An unrecorded edition of the superb Henry Tanner map of North America, issued in 1845 as President Polk was bringing disputes over Oregon and Texas to a boil. Setting its prime meridian at Washington, D.C., the map depicts North America in its entirety, with much attention given to the continent’s river systems and topography.  Heavy red […]

The 1847 Disturnell Treaty Map of Mexico and the American West. A map with a fascinating publishing history and a vital role in one of the most momentous territorial negotiations in American history. Disturnell’s large map depicts Mexico, with wash color by state, as well as much of the United States west of the Mississippi […]

A rare engraved copper printing plate by the important Philadelphia partnership of Tanner, Vallance and Kearney, featuring portraits of six American generals from the War of 1812 facing portraits of six of Napoleon’s marshals. The plate bears two separate images engraved in line and stipple, each signed by Tanner, Vallance and Kearney and separated by […]