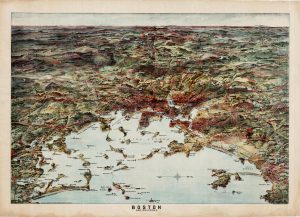 The firm of George H. Walker was established in 1882 and remained in operation iuntil 1927. An advertisement in the 1882 Boston Business Directorydescribes them as “publishers and lithographers” doing “engraving in all its branches, map engraving and photo-lithographing.”  If what survives today is any measure, Walker’s was Boston’s most prolific lithographic firm of the late 19th and early 20th century.

Among other things, George H. Walker issued an important atlas of Massachusetts, separate maps of Boston and its metropolitan area, and birds-eye views of tourist destinations such as Bar Harbor, Edgartown, Lake Sunapee, Narragansett Bay and Mount Washington (Many of the latter were stylistically similar, rendered as decorative chromolithographs on thin paper, folded and tipped into printed card wrappers.) The output of the firm extended well beyond maps and views, however, to include among other things portraits, sheet music, and book illustrations.

For more on George H. Walker and his firm, see the excellent biographies in Pierce and Slautterback’s Boston Lithography and John Reps’ Views and Viewmakers of Urban America.

An attractive chromolithographic edition of this 1903 bird’s-eye view of Lake Winnipesaukee by prolific Boston publisher George H. Walker. By 1903 the Lakes and White Mountain regions of New Hampshire had become major tourist destinations, with a well-developed network of rail and steamer routes carrying visitors from Boston, New York and elsewhere, and grand hotels […]

A lovely and unrecorded early 20th-century chromolithographic bird’s-eye view of Canobie Lake Park in Salem, New Hampshire. The view depicts the Park as seen from an imaginary vantage point to the north, with Canobie Lake in the middle ground and the cities of the Merrimack Valley in the far distance. Though a roller coaster is […]

A lovely example of this well-known 1903 bird’s-eye view of Lake Winnipesaukee, unusual for being in vibrant chromolithographic color on heavy paper. By 1903 the Lakes and White Mountain regions of New Hampshire had become major tourist destinations, with a well-developed network of rail links and hotels. Accompanying this development was a rich literature and […]

An interesting bird’s-eye view of the Charles River and Boston’s western suburbs looking southwest from an imaginary point high over Waltham, encompassing much of Dedham, Natick, Needham, Newton, Waltham, Wellesley and other towns. Through it all winds the serpentine Charles River, passing landmarks such as the Waltham Watch Factory, Norumbega Park and the dam and […]

A rare and beautiful view of Bar Harbor and Mt. Desert Island, depicted when it was a favored summer resort of the Gilded Age elite. The image depicts Bar Harbor as seen looking southward from an imaginary elevated viewpoint over Bar Island. The town’s sprawling hotels, clubs and mansions are prominently featured, as is its […]

A most appealing pictorial map of downtown Boston, drawn by Richard Lufkin and issued in 1930 to promote the Boston Elevated Railway. The map provides a detailed view of Boston’s intricate street plan—a terror to drivers even today–and uses different line forms to delineate the routes of rapid transit, trolley, and bus lines. Accompanying the […]

A spectacular and extremely rare chromolithographic bird’s-eye view of what is today known as Boston’s Seaport District, issued to promote the freight terminals of the New York, New Haven & Hartford Railroad. The terminals had their origin in a massive land-reclamation project begun in the 1870s by the Commonwealth of Massachusetts and the City of […]

A rare and appealing bird’s-eye view of Boston and Environs as seen from a point high above the Harbor. This panoramic view is centered on Boston but extends south to Nantasket, west to Framingham and Mount Wachusett, and north to Swampscott.  The more populous areas along the coast are highlighted in red, while the area’s […]

A mammoth and extremely rare historical map of Boston and its metropolitan area at the turn of the 20th century, with a wealth of historical information. Measuring nearly six feet high and four-and-one-half wide, this absolutely enormous map depicts the Boston metropolitan area, bounded by Swampscott, Billerica, Dover and Braintree. Town boundaries are shown; as are seemingly every […]

A fine example of this well-known chromolithographic bird’s-eye view of Casco Bay and Portland, Maine, lithographed for the Maine Central Railroad by George H. Walker. Established through merger in 1862, by the early 20th century the Maine Central Railroad dominated its market, with lines throughout the state and neighboring New Hampshire. It commissioned this lovely […]