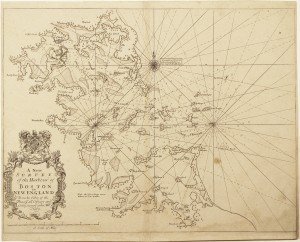 John Seller (d.1697) can be considered the founder of the English chart-publishing trade, his legacy extending into the nineteenth century. His most ambitious project was The English Pilot, composed in a series of volumes, the Northern Navigation (1671), the coasts north and east of the Thames Estuary, the Southern Navigation (1672), the coasts south and west of the Thames Estuary round to Gibraltar, and the Mediterranean Pilot (1677). His business successors added volumes devoted to West Africa (1701) and the Oriental Navigation (1703).

The most successful of all the additional volumes was The English Pilot. The Fourth Book (1689), devoted to North America and the Caribbean, which was first published by John Thornton and William Fisher. The charts were drawn by Thornton, based on up-to-date English sources, mostly unidentified, though the chart of Boston Harbour can be attributed to Cyprian Southack.

John Thornton was succeeded by his son Samuel, Fisher by his son-in-law, Robert Mount, trading as Mount and Page. Following Samuel Thornton’s early death, Mount and Page acquired his materials and the firm, in the hands of successive members of the Mount family and Page family, continued to reprint the atlas with the last (the 35th) edition appearing in 1794. While John Thornton and Robert Mount, and to a lesser extent William Mount (I), were diligent in their renewal of the atlas, later generations allowed the volume to ossify, with no significant development of the volume, either in text or chart, from the mid-1730s onward. Well before the final edition, the Fourth Book was more dangerous than useful to the user.

Following the 1689 first edition, significant additions to the Fourth Book included a replacement chart of Boston Harbour (1706),Samuel Thornton’s chart of New England (1713) and Mark Tiddeman’s pair of charts of New York Harbour and the Chesapeake Capes (1729) and a new chart of New England after Cyprian Southack (1731).

George Grierson prepared an Irish piracy, with the charts copied from the English edition, printed in Dublin in 1749 and 1767.

A rare chart of the New England coast published by George Grierson in his pirated edition of the English Pilot. The Fourth Book. The chart depicts the northeast coastline and nearby waters from New York City to Mount Desert Island. Designed for use at sea, it provides considerable information on soundings, banks and shoals, and […]

An important early chart of the Delaware and Chesapeake Bay regions from The English Pilot. The Fourth Book, based upon the seminal work of Augustine Hermann.  The chart depicts the coast from Staten Island as far south as modern-day Virginia Beach. The geography is based largely on that of Augustine Hermann’s monumental 1673 map Virginia and […]

Uncommon English chart of the Avalon Peninsula at the south-eastern corner of Newfoundland, based on surveys performed by the English hydrographer Henry Southwood in the 1670s. Henry Southwood is the most significant figure in the mapping of Newfoundland prior to Captain James Cook in the 1750s. For all that, remarkably little is known about him. […]

This is the earliest printed chart of Casco Bay. First issued in 1720, it remained in print for decades and was not superseded for more than half a century. Cyprian Southack Southack was born in London in 1662 and emigrated to Boston in 1685. A man of enormous energy, he was active for decades as a privateer, […]

The earliest printed chart of Casco Bay, based on the surveys of Cyprian Southack, one of early New England’s most energetic and interesting figures. Cyprian Southack Southack was born in London in 1662 and emigrated to Boston in 1685. A man of enormous energy, he was active for decades as a privateer, naval captain, navigator, […]

An important chart of the coast of northeastern North America, based on the work of Cyprian Southack, one of Colonial Boston’s most colorful figures. A Correct Map of the Coast of New England depicts the northeast coast from Sandy Hook to the southern edge of Cape Breton. It provides much information on soundings, banks and shoals, and other […]

A very appealing 1729 chart of the waters around New York City, with much information on the early European settlement in the region.  This appealing chart provides much hydrographic detail, with particular emphasis on the challenging approaches to New York Bay and Harbor. It also provides much terrestrial information, including New York City at the […]

A considerable rarity, and the most detailed chart of Boston Harbor for its time. The chart depicts Boston Harbor from modern-day Winthrop in the north to Hull and Hingham in the south. It provides an immense amount of information for these complicated waters, including the many harbor islands, hundreds of soundings, and a multitude of rocks […]