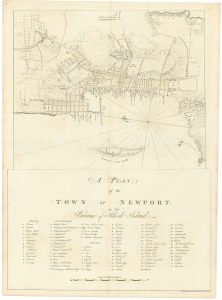 J.F.W. des Barres (1721-1824) was a Swiss-born engineer, surveyor, chart maker, publisher and colonial administrator who served for the more than half a century in British North America. He volunteered for the British Army, trained at the Royal Military Academy, Woolwich and was posted to the 60th (Royal American) Regiment, where he served with distinction in the French and Indian War, was present at the capture of Louisbourg and Quebec, and helped produce a magnificent survey of the St. Lawrence River.

At war’s end, Des Barres was appointed by the Admiralty to survey the coast of Nova Scotia, an enormously ambitious and expensive undertaking that required the better part of ten years. He returned to England in 1774 and, with financial backing from the Admiralty, began organizing the publication of his charts and those of others, most notably those supplied by Samuel Holland, Surveyor General of Quebec and of the Northern District of North America. He ultimately compiled these into The Atlantic Neptune, which in its most complete form ran to four volumes containing hundreds of navigation charts, maps, and coastal recognition profiles, topographical views and even Revolutionary War battle plans. The Atlantic Neptune is not just the finest atlas of North America from the colonial period, but one of the greatest atlases ever published.

Later in life Des Barres served as Lieutenant Governor of Cape Breton (1784-87) and Prince Edward Island (1804-1812). He died at the jaw-dropping age of 102, his long life perhaps fueled by an abundance of bile.

A rare, monumental and momentous general chart of northeastern North America, representing the capstone of British efforts to map the region after the end of the French and Indian War, and described as “by far the most accurate cartographic rendering of its subject made for many decades.” (Alex Johnson) This example separately published, probably in […]

A large, superbly-executed, and very scarce map depicting the 1776 campaign for New York City and Westchester. The campaign was a disaster for General Washington and the young Continental Army, who had been ordered by the Continental Congress to defend the indefensible city. Surrounded as the city is by navigable rivers, and blessed with a […]

Spectacular Revolutionary-era chart of the harbor of Charleston, South Carolina, likely compiled from Colonial-era surveys and British reconnaissance just before the 1776 Battle of Sullivan’s Island. Published in the Atlantic Neptune, it was for its time by far the finest printed chart of the area. Blessed by a large, sheltered harbor and proximity to the […]

A very fine chart of Massachusetts Bay from the Atlantic Neptune, issued for use of British navigators early in the Revolutionary War. The Atlantic Neptune is arguably the finest atlas of North American waters ever produced, achieving in its more complete states full coverage of the East and Gulf Coasts. The Neptune’s great strength was […]

A lovely example of what was for its time the finest chart of Boston Harbor and its approaches. The chart was issued in 1776 in The Atlantic Neptune, an atlas of charts and views of the East Coast used by British captains through much of the Revolution. The charts of the Neptune were so respected that […]

The two New England volumes of the Barre Publishing Company’s wonderful full-scale reproduction of The Atlantic Neptune. Produced at great (actually unsustainable) expense, this work is printed on luxurious rag paper from photogravures of Augustus Loring’s copy of the Neptune, with each image colored by hand. The project was so expensive that it was abandoned […]