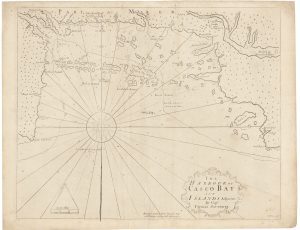 Cyprian Southack (1662-1745) was born in London into a naval family and enlisted in the navy in turn. He saw his first action aged ten, at the Battle of Solebay in 1672. He subsequently emigrated to Massachusetts, where he was granted Letters of Marque as a privateer in 1689. An experienced and highly-regarded pilot, he was recruited for Sir William Phipps’ expedition to Nova Scotia but missed the ill-fated Quebec expedition. From 1692 to 1713 he was entrusted with guarding the New England coast against French depredations, and was involved in many naval operations. In 1713, at the end of “Queen Anne’s War”, he became involved in the fisheries before retiring in about 1724.

Cyprian Southack was a talented chart- and mapmaker and throughout his career he mapped the many coasts and harbours he visited. The vast bulk of his output remained in manuscript, often highly finished presentation copies for the King or colonial authorities, such as this chart of Boston Harbor. but a few printed charts are known. His first was a chart of Boston Harbour for John Thornton and William Fisher, The English pilot. The fourth book (1689); his Chart of the gulf and river St. Lawrence 1711 was printed in fifty copies distributed to Royal Navy officers preparing for an attack on Quebec, but there is no surviving example. Similarly, his chart of Casco Bay 1720, is known only from the London piracy. The companion map of Canso is recorded in a single example and was also pirated in London.

His two most important works were his wall-map of the English Empire (1717), the earliest surviving American engraved map, and not rivalled in ambition and size until the 1750s. He announced plans for a chart of the New England coast in 1717, finally published on eight-sheets in London in 1729, and reprinted thereafter, which remained the best chart of the region until superseded by Joseph des Barres in the 1770s, its significance exemplified by the speed by which John Senex and Thomas Bowles published single-sheet versions, which remained in circulation to the Revolutionary War.

A rare chart of the New England coast published by George Grierson in his pirated edition of the English Pilot. The Fourth Book. The chart depicts the northeast coastline and nearby waters from New York City to Mount Desert Island. Designed for use at sea, it provides considerable information on soundings, banks and shoals, and […]

An important chart of the coast of northeastern North America, based on the work of Cyprian Southack, one of Colonial Boston’s most colorful figures. A Correct Map of the Coast of New England depicts the northeast coast from Sandy Hook to the southern edge of Cape Breton. It provides much information on soundings, banks and shoals, and other […]

This important chart depicts the northeast coast from Sandy Hook to Cape Breton, based in great part on the personal observations of its maker Captain Cyprian Southack. Intended as a working chart, it provides numerous soundings as well as information on banks, shoals and other hazards, particularly in the waters off Nova Scotia and Cape Cod. […]

An important chart, with a close connection to one of Boston’s most colorful early figures. A Correct Map of the Coast of New England depicts the northeast coast from Sandy Hook to the southern edge of Cape Breton. Intended as a working chart, it provides much information on soundings, banks and shoals, and other navigational hazards, […]

An extraordinary chart of Casco Bay, with a great back story. Cyprian Southack Southack was born in London in 1662 and emigrated to Boston in 1685. A man of enormous energy, he was active for decades as a privateer, naval captain, navigator, all-purpose diplomat and “fixer,” and of course map- and chart maker. Given the […]

The earliest printed chart of Casco Bay, based on the surveys of Cyprian Southack, one of early New England’s most energetic and interesting figures. Cyprian Southack Southack was born in London in 1662 and emigrated to Boston in 1685. A man of enormous energy, he was active for decades as a privateer, naval captain, navigator, […]