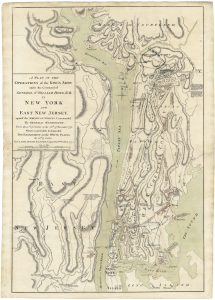 Claude Joseph Sauthier (1736-1802) was one of the most important surveyors in the British service in the early years of the Revolutionary War. He was born at Strasbourg, Alsace, in the Franco-German borderlands. Evidently trained as a surveyor, possibly in the great surveys of Alsace in the 1750s; emerged as a surveyor in the 1760s, with a particular expertise in mapping towns and garden-planning.

William Tryon, Governor of North Carolina, brought him there in 1767 to carry out survey work, a highlight of this period ten highly-finished manuscript town plans, now in the British Library. He is also credited with supplying survey work used in John Collet’s Compleat Map of North Carolina from an Actual Survey (1770).

In 1771 Tryon was made governor of New York, and Sauthier travelled north, where he set to work preparing surveys of the province. With the onset of the Revolutionary War, these surveys provided the basis for an important series of maps of New York Province, often published in conjunction with William Faden, such as his Topographical Map of Hudsons River (1776) and maps of the New York Campaign of 1776. During the early years of the war he was on the staff of Earl Percy, future Duke of Northumberland and remained in his service the rest of his working life, first in New York in 1776-1777 and then in England. A rich cache of Claude Joseph Sauthier manuscripts to found at the Percy seat, Alnwick Castle.

The first large-scale map of the region, and likely used to plan the disastrous 1777 campaign that culminated in the surrender of Burgoyne’s army at Saratoga. This lovely map depicts the Hudson River-Lake George-Lake Champlain corridor, during the Colonial era a key invasion route between Canada and the Northern Colonies. The major waterways and their […]