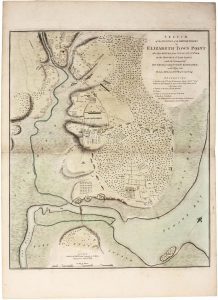 A battle plan is any map depicting military events in a defined locale over a short period of time, including for example skirmishes, pitched battles and sieges.  What makes them particularly interesting is not simply the inherent, horrifying drama of war, but the challenge of conveying not only geographic phenomena but events as they take place over time: The designer of a battle plan must condense four-dimensional events into the two dimensions of a sheet of paper.

Another way battle plans vary is in the degree to which they highlight the maker’s own sympathies.  For example the battle plans issued by William Faden during the Revolutionary War tend to be straightforward and technical, such as this plan of the 1775-76 American Siege of Quebec. By contrast, this plan of the 1874 “White League Revolt” in New Orleans explicitly celebrates the attack on the Reconstruction government of the state.

Fine example of the Samuel Augustus Mitchell’s impressive 1847 map of Mexico and the Southwest, published to take advantage of public interest in the ongoing war between that country and the United States. The Mexican-American War was catalyzed by the United States’ annexation of Texas in 1845 and an ongoing dispute over whether the new […]

A contemporary view by an American participant of the September 1814 Battle of North Point, at which Maryland militia bravely defended Baltimore against a large force of British regulars. Extremely rare, and here in an unrecorded proof or first state. Background The early land campaigns of the War of 1812 took place along the Canadian […]

This rare engraving from Charles Smith’s Monthly Military Repository is the first detailed battle plan of White Plains to be printed in the United States. The battle was violent but inconclusive. Following his decisive victories in Brooklyn and Manhattan, the British commander William Howe somehow allowed Washington to get the remnants of his army away […]

A richly-detailed broadside providing a cartographic overview at the outset of the Civil War, no doubt churned out in haste to meet demand for a reading public hungry for maps to put the disturbing war news in context. A railroad map of the country in three colors occupies the center of the broadside, flanked below […]

An important plan depicting a key battle of the American Revolution. Background Following the British evacuation of Boston and retreat to Halifax in March 1776, the Americans held a tenuous control of the East Coast from Maine to Georgia. In truth, British mastery of the sea gave them the option to invade more or less […]

A unique and appealing composite depicting the failed British attack on Charleston, South Carolina in the Summer of 1776. Background In early 1776 General Howe sent an expedition against the Carolinas, the first objective being the region’s undisputed commercial and cultural hub at Charleston. The expedition, commanded by General Henry Clinton, was to rendezvous with […]