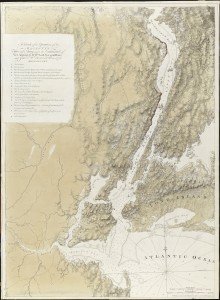 The Atlantic Neptune was an atlas of charts and views of North American waters used by British navigators through much of the Revolution. The charts were generally of a very high quality, outstripping anything previously available.

The Atlantic Neptune is indelibly associated with the name of J.F.W. Des Barres.  He oversaw the publication of the charts, and indeed had supervised the surveys of Nova Scotia later published in the Neptune.  However the project had been catalyzed by Samuel Holland, a Dutch engineer in the British service. In 1764 Holland had proposed to the Board of Trade “an accurate and just Survey… upon… a general scale and uniform plan” of North America east of the Mississippi. This was to be a “geodetic” survey following the most advanced methods then in use in Europe, but applied for the first time in North America.

The demand for charts was high in those unsettled times, and Des Barres’ operation soon occupied two townhouses and employ 20 assistants in compiling, drafting and correcting the charts. While The Atlantic Neptune was usually made up to order and had no standard collation, it ultimately extended to five sections: Nova Scotia, New England, the River and Gulf of St. Lawrence (based on the work of James Cook), the coast south of New York, and American coastal views.

A rare, monumental and momentous general chart of northeastern North America, representing the capstone of British efforts to map the region after the end of the French and Indian War, and described as “by far the most accurate cartographic rendering of its subject made for many decades.” (Alex Johnson) This example separately published, probably in […]

A landmark in the mapping of Massachusetts, being the first large-scale chart of Plymouth Bay and environs. This chart depicts the waters of Plymouth Bay, with its distinctive geography marked by two long barrier beaches. The hydrographic data includes tidal data and soundings along the channels into Plymouth and the Jones and Duxbury Rivers. The […]

A lovely and important chart of Boston Harbor produced in 1780 by order of the French Admiralty for use during the American Revolution. The chart was published in 1780, the year General Rochambeau landed with his army at Newport, Rhode Island, which for the duration of the American Revolution served as the major French base […]

The earliest printed plan of Newport, Rhode Island, published for the use of British forces just months before they occupied the town in December 1776. Based on surveys by Charles Blaskowitz, one of the finest surveyors in the British military, it is also arguably the most appealing plan of Newport ever issued: The overall layout, […]

A large, superbly-executed, and very scarce map depicting the 1776 campaign for New York City and Westchester. The campaign was a disaster for General Washington and the young Continental Army, who had been ordered by the Continental Congress to defend the indefensible city. Surrounded as the city is by navigable rivers, and blessed with a […]

Spectacular Revolutionary-era chart of the harbor of Charleston, South Carolina, likely compiled from Colonial-era surveys and British reconnaissance just before the 1776 Battle of Sullivan’s Island. Published in the Atlantic Neptune, it was for its time by far the finest printed chart of the area. Blessed by a large, sheltered harbor and proximity to the […]