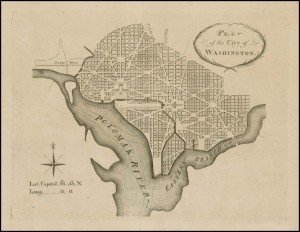 Andrew Ellicott (1754-1820) was one of the great American surveyors and mapmakers of the late 18th century.  After serving in the Revolution, in 1784 he worked with David Rittenhouse and Bishop James Madison to complete the survey of the Mason-Dixon Line between Maryland and Pennsylvania. These connections proved valuable, and in the following years he conducted important surveys for the State of Pennsylvania, including its western boundary with the Ohio Country.

Ellicott’s connections and reputation was such that in January 1791 President Washington engaged him to conduct a topographical survey of the area of the District of Columbia, while Pierre L’Enfant was hired to develop a plan for the new capital city of Washington. L’Enfant was brilliant but difficult, so much so that President Washington eventually fired him in 1792 and engaged Ellicott, who used L’Enfant’s design as the basis for his plan of the city.

In 1796 Washington engaged Ellicott once again, this time for the joint survey of the boundary between Spanish West Florida and the United States, as established by the Treat of San Lorenzo.  In 1803 he helped train Merriwether Lewis in advance of the latter’s transcontinental exploration. In 1813 he was appointed to teach at West Point, where he lived until his death in 1820.

Fine, separately-issued example of Thackara & Valance’s small-scale edition of Ellicott’s plan of Washington, D.C., the first published plan of the nation’s capital. Due to the vicissitudes of war and sectional politics, the site of the American capital remained unsettled for years after independence, and before 1790 Congress met variously at Philadelphia, Lancaster and York, […]

The first printed map of Washington, D.C. being the small-scale edition of the “Ellicott Plan” engraved by Thackara & Valance for the Columbian Magazine. Due to the vicissitudes of war and sectional politics, the site of the American capital remained unsettled for years after independence, and before 1790 Congress met variously at Philadelphia, Lancaster and […]

The first large-scale edition of the official plan of the future capital of the United States. Due to the vicissitudes of war and sectional politics, the site of the permanent American capital remained unsettled for years after independence. In fact, prior to 1790 Congress met variously at Philadelphia, Lancaster and York, Pennsylvania; Annapolis and Baltimore, […]

Post-Revolution tensions with the United States didn’t prevent British manufacturers from developing a vibrant export trade in decorative pottery featuring American patriotic images. Typical motifs included allegorical symbols of American unity, portraits of the Founding Fathers and even maps, or in the present case of this charming jug all three. One side features allegorical figures […]

An unrecorded illustrated broadside promoting the products of the Mars Works in Philadelphia, established in 1807 by noted inventor, industrialist and author Oliver Evans (1755-1819). One of America’s great self-taught inventors and industrialists, the contributions of Oliver Evans included the design and manufacture of an automated grist mill, one of which was installed at Mount […]