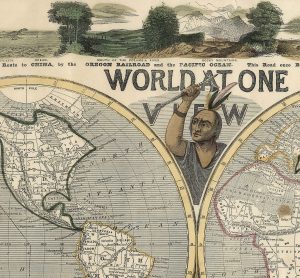 An appealing, richly pictorial broadside map designed to impart to its American viewers, in a single, composite image, a sense of the wider world and by implication, their country’s place in it.

World at One View is centered on a double-hemisphere world map, whose most interesting feature is a projected trans-continental railroad from New York to Astoria, Oregon. The map is surrounded by a riot of imagery, including a “Panoramic View of the Route to China, by the Oregon Railroad and the Pacific Ocean;” a display of “female costumes” from around the world; another display of the world’s great buildings; informational charts; a vignette of a waterspout; and corner portraits of a “Caucasian,” “Mongul,” “Malay” and “African.” From between the hemispheres a native American warrior emerges and waves his axe, though it’s impossible to say whether he is intended to be enthusiastic or threatening. The metal cut frame adds further decorative value, though it’s hardly necessary.

I’m not entirely sold, but Matthew Edney detects imperial aspirations embedded in the broadside, arguing that it presents a “vision of the United States of America as the next great world empire.” In support, he cites the illustrations at the bottom, a horizontal scroll of monuments from China through India, Egypt, Rome and Paris to New York at the far right. Perhaps even more to this point, to the right of the title the sun appears to have set on the Old World, while to the left it rises over the New.

The lithographic firm of Humphrey Phelps (also known as Phelps, Humphrey) operated in New York City from 1841 to 1853, and at various times co-published work with Gaylord Watson and with Ensign & Thayer. Phelps produced maps, prints and books, and was known for the Phelps Guides series of folding maps and wall maps for travelers, which he began producing in 1838.

Though bearing a copyright date of 1847, this impression of World at One View should be dated to 1851-52. Those are the only years during which Sowle & Ward were at 43 Cornhill in Boston and Ensign & Thayer simultaneously at the 50 Ann Street address in New York City.

There must have been sustained demand for this sort of pictorial geographical compendium, as this was just one of several similar broadsides issued over two decades. The title, at least, can be dated at least as early as 1837, when one William Worts of New York applied it to a large informational and statistical chart. In 1846, the year before the present chart appeared, Phelps had produced and published a Pictorial View of the World with rather similar imagery and thematic content (Rumsey 2922). Then in 1852 he produced a revised version of World at One View, with minor differences, this time published by Ensign, Bridgman and Fanning (Rumsey 2918). In 1854 Ensign, Bridgman & Fanning issued their own entry in the series, under the same title but much larger and on a vertical format (Rumsey 5087). Finally, in 1862 Phelps & Watson and Rufus Blanchard collaborated on a View of the World, the largest and most intricate of the series.

References
OCLC 966688656 et al list a few examples of this image, though a) the publishers’ imprints all vary somewhat, and b) it is impossible to know how many are original prints and how many “internet resources.”. Rumsey 5937 (lacking the Boston and Cincinnati imprints). Edney, “Mapping Empires, Mapping Bodies: Reflections on the Use and Abuse of Cartography,” Treballs de la Societat Catalana de Geografia, no. 63 (2007), pp. 92-93. See also Peters, America on Stone, pp. 181 and 325 (Ensign, Phelps). Schulten, Mapping the Nation, p. 30 and chap. 1 note 47.

Purchase
inquiry
by e-mail Have a
similar item
to sell?