Thanks for signing up!
James T. B. Ives, STRATA MAP OF PART OF THE UNITED STATES OF AMERICA, Together with a Portion of the Dominion of Canada, To Illustrate the Fundamental Facts of Geological Science… New York: Charles E. Merrill & Co., 1888.
Ten superimposed maps of the eastern United States, each 20”h x 26”w and hand colored in a single tint to indicate a particular geographic stratum. Each map with cut-outs to reveal the maps below. Housed in the original wood frame (original glass perished and replaced with acrylic), with hooks at top for hanging from a wall and hinged clamshell fashion at the bottom to allow access to the maps. See below for condition details
Sold
Search for similar items Have a similar item to sell?

An ingenious multi-layered educational instrument, with ten superimposed cut-away maps allowing students to “peel away” geological strata of the Eastern United States. Extremely fragile, a remarkable survival, and only the third example located.

The instrument’s construction is rather complex, consisting of ten superimposed cartographic layers, each featuring a retrofitted Colton map depicting the United States as far west as the Great Plains. The layers are arranged sequentially, each representing a distinct period of the Phanerozoic Eon (This is the era of abundant animal and plant life, now defined as extending from some 541 million years ago to the present day.) Thus the uppermost layer, in white, represents the current Quarternary Period. This is superimposed on a layer representing the Neocene (yellow); which is in turn superimposed on a layer representing the Eocence (brown); and so on, all the way “down” to the Cambrian (gray), the period when the amount and variety of animal and plant life first exploded. Below all of these is a pink layer representing the “Archaean” Eon (a usage inconsistent with modern terminology, in which the Phanerozoic Eon is preceded by the Proterozoic). The maps are hinged to rings along their bases, so that they may be raised or lowered one-by-one, enabling the user to “travel” backward or forward in geologic time, viewing the composition of the earth’s surface at different periods.

Now, geology is anything but tidy: strata are not arranged neatly like the layers of a cake, but rather raised, lowered, eroded and even folded on one another. To accommodate this, each cartographic layer is cut out to reveal those below, demonstrating how at any given time the earth’s surface is a patchwork of strata set down at very different geologic periods. So for example, per Ives only the southeastern coastline and the lower Mississippi Valley were laid down during the Quarternary (most recent) Period, with earlier, even much earlier strata predominating elsewhere in the country. For example, the eastern Appalachians reveal at their surface strata first laid down in the Archaean and Cambrian Periods.

Inventor Ives’ advertisements for the Strata Map made clear his belief that it was far superior to traditional two-dimensional geological maps, pioneered in the 18th century, which by their nature were ill-suited to depict the superposition of geological strata. 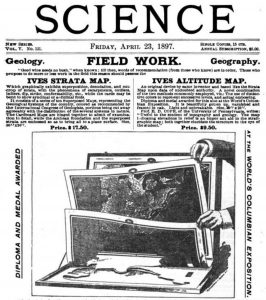 “In the study of problems connected with the evolution of the continent, the geologist will realize the increased facility afforded by a method which makes it possible to remove the layers representing the several systems, at pleasure, reducing the area exhibited to its condition at any geological epoch, allowance being made for original limitation and subsequent erosion. He will also recognize the advantage of a map constructed of strata which by their superposition convey to the eye and the mind the relative positions in the geological scale of formations which they severally represent, avoiding the necessity of constantly referring to the index, as in the use of ordinary geological maps, or the mental effort and consequent diversion involved in keeping those particulars present to the mind.” (Science, vol. V no 121 (Apr. 23, 1897), p. i)

“The Strata Map is a device for the more efficient teaching of Physical Geography and Elementary Geology in Schools. It consists of a series of Ten Superimposed Maps of DIFFERENT COLORS, representing the several geological formations of the district, enclosed in a glazed frame, the whole hinged to admit of emanation in detail. By its means superposition, denudation, and outcrop of strata are graphically exhibited, with the phenomena of escarpments, outliers, inliers, dip, strike, conformability, &c., and the Cards may be bent to show synclinal or anticlinal folds.” (The Critic, vol. XII no. 300 (Sept. 28, 1889), p. vi)

James Thomas Bostock Ives (1839-1915)
According to one biographer, Ives

“was educated in private schools in London, and on completing his education entered business with his father in 1858. Upon his father’s retirement, Mr. Ives took over the business and established a branch in Hampstead, England. He was very active and energetic, buying land and building houses, and at one time operating two stores in London. Meeting with business reverses in 1883, he gradually got rid of his English affairs and came to Toronto, Canada, in 1886. Of a scientific turn of mind, long a member of the Geological Society of London, Mr. Ives turned his attention exclusively to that angle of life when he came to America. He invented and manufactured a series of maps used widely in the teaching of geology by colleges and in illustrating territorial growth in history courses. From Canada he moved to New York, then to Philadelphia, engaged in making maps and in teaching first geology, and later, history. In 1904 he joined his son in Andover, where he remained until his death. He was a man of brilliant mind and an interesting conversationalist.” (John Hoyt Lockwood, Western Massachusetts: A History)

Ives also designed a Historical Map Showing the Successive Acquisitions of Territory by the United States of America (ca. 1896) and the Ives Altitude Map (date not known). The former relied on moveable layers to depict American territorial expansion. The latter, of which I find no extant examples or images, is described as using “distinctive colors to represent successive levels, and actual embossing.” (Science, op. cit.)

The Strata Map was apparently well received in the scientific community. Ives’ advertisements reprint testimonials from eminences of geology such as John Wesley Powell, and attesting to his having received a “diploma and gold medal” at the World’s Columbian Exposition in Chicago in 1893.

For all its advantages, the Strata Map was fragile, complex and expensive, advertised for $17.50-$20 at a time when for example Rand McNally was selling a set of 32 large Historical Charts for just $20. As a result of these factors its production run was likely very small, and its inherent fragility surely ensured a low survival rate of the few that were produced. Indeed, I have been able to locate only two other extant examples—at the Colorado School of Mines and Library of Congress—and no reference to another having appeared on the antiquarian market.

References
As of October 2019, OCLC 6193461 gives holdings only at the Colorado School of Mines and the Library of Congress.

Expertly restored: The Strata Map was disassembled. Tears, cracks and losses to the layers were repaired, then each layer was mounted on a non-woven polyester tissue using BEVA resin as an adhesive, with a wrap around the perimeter to prevent cracking. The base layer (pink) was tonally retouched and backed onto archival board for additional support, and a replacement period board was used to enclose the verso of the entire object. Broken glass was replaced with an acrylic sheet.